Genius Brands International Announces Its Hit Series, "Rainbow Rangers", is Now Sold and Being Broadcast Across 100% of the Western Hemisphere

“In these unusual times, we are seeing that viewing is increasing, not decreasing, and it underscores the timelss nature of animated programs as an asset class immune to normal economic problems,” said Genius Brands’ Chairman & CEO, Andy Heyward.  “Corus’ Treehouse channel, which reaches 80% of Canadian preschoolers*, now airs Rainbow Rangers season one and season two Monday – Thursday at 2:50 pm.  Mexico’s Televisa, which dominates the television market of the largest Spanish-speaking country in the world with a reach of 60-85% of all households, will broadcast four episodes from season one each week at 8:30 am, beginning May 2020.”

Rainbow Rangers currently airs in the U.S. on Nick Jr. and on broadcasters in key territories around the world, including CCTV (China), Nickelodeon and NOGGIN (Latin America); Cartoonito (Italy); and Discovery Kids (Middle East).  Additionally, the series is available on platforms, including China’s leading streaming service, iQiyi, and Televisa’s BLIM TV in Mexico.

“With the addition of two A-List broadcast partners, Corus in Canada and Televisa in Mexico, we have significantly expanded the reach of Rainbow Rangers with maximum penetration across the Western Hemisphere,” commented Caroline Tyre, SVP International Distribution & Head of Genius Brands Network at Genius Brands.  “Additionally, we are currently in negotiations with a number of other leading broadcasters around the world. This special series delivers fun, adventure and entertainment together with important positive messaging of empowerment and diversity.”

ABOUT GRUPO TELEVISA
Televisa (Grupo Televisa, S.A.B.) is a leading media company in the Spanish-speaking world, an important cable operator in Mexico and an operator of a leading direct-to-home satellite pay television system in Mexico. Televisa distributes the content it produces through several broadcast channels in Mexico and in over 75 countries through 26 pay-tv brands, television networks, cable operators and over-the-top or “OTT” services. In the United States, Televisa’s audiovisual content is distributed through Univision Communications Inc. (“Univision”) the leading media company serving the Hispanic market. Univision broadcasts Televisa’s audiovisual content through multiple platforms in exchange for a royalty payment. In addition, Televisa has equity and warrants which upon their exercise would represent approximately 36% on a fully-diluted, as-converted basis of the equity capital in Univision Holdings, Inc., the controlling company of Univision. Televisa’s cable business offers integrated services, including video, high-speed data and voice services to residential and commercial customers as well as managed services to domestic and international carriers. Televisa owns a majority interest in Sky, a leading direct-to-home satellite pay television system and broadband provider in Mexico, operating also in the Dominican Republic and Central America. Televisa also has interests in magazine publishing and distribution, radio production and broadcasting, professional sports and live entertainment, feature- film production and distribution, and gaming.

Forward Looking Statements: Certain statements in this press release constitute "forward-looking statements" within the meaning of the federal securities laws. Words such as "may," "might," "will," "should," "believe," "expect," "anticipate," "estimate," "continue," "predict," "forecast," "project," "plan," "intend" or similar expressions, or statements regarding intent, belief, or current expectations, are forward-looking statements. While the Company believes these forward-looking statements are reasonable, undue reliance should not be placed on any such forward-looking statements, which are based on information available to us on the date of this release. These forward looking statements are based upon current estimates and assumptions and are subject to various risks and uncertainties, including without limitation those set forth in the Company's filings with the Securities and Exchange Commission (the "SEC"), not limited to Risk Factors relating to its patent business contained therein. Thus, actual results could be materially different. The Company expressly disclaims any obligation to update or alter statements whether as a result of new information, future events or otherwise, except as required by law.

A photo accompanying this announcement is available at https://www.globenewswire.com/NewsRoom/AttachmentNg/a8fb97a5-3ffc-4716-8937-49e9fdc28057 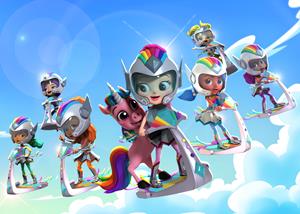 Genius Brands International increases the reach of its flagship animated preschool series, Rainbow Rangers, across the Western Hemisphere with two new broadcast deals signed with Canada’s Treehouse, owned by Corus Entertainment, and with leading broadcaster Televisa in Mexico. Rainbow Rangers currently airs in the U.S. on Nick Jr. and on broadcasters in key territories around the world, including CCTV (China), Nickelodeon and NOGGIN (Latin America); Cartoonito (Italy); and Discovery Kids (Middle East);. Additionally, the series is available on platforms, including China’s leading streaming service, iQiyi, and Televisa’s BLIM TV in Mexico.