This morning we announced that ARNOLD SCHWARZENEGGER has entered into an agreement to become a significant investor in Genius Brands International.

I want to share with you the importance of this event.

Our upcoming tentpole series STAN LEE’S SUPERHERO KINDERGARTEN not only stars Arnold, but he is also Co-Executive Producer.  Governor Schwarzenegger will lend his signature voice, his likeness in animation, and his cache and standing to launch and promote the series.

The Governor has elected to take his compensation, not in cash, but in warrants to purchase shares of Genius Brands common stock (Nasdaq: GNUS).

His tens of millions of followers across Facebook, Instagram, and Twitter will bring not only a devoted following to the series, but to Genius Brands overall.  This, added to the millions of Stan Lee followers, puts rocket fuel in our Genius Brands’ tanks, and it would be impossible to overstate the importance of this event.

Governor Schwarzenegger and Stan Lee had been friends for years and sought to develop an animated children’s property together. STAN LEE’S SUPERHERO KINDERGARTEN is now the result of this collaboration. The development was begun by Fabian Nicieza, one of Stan’s longtime collaborators, and himself, creator of Deadpool and writer of over 1,000 Marvel and DC Comic books, including Spider-Man, Batman, and the Avengers,  among others.  The Superhero Kindergarten series episodic writing will be done by Steven Banks (head writer of Sponge Bob Square Pants).  Added to this team is multi-Emmy Award-winning director, Mike Maliani, who worked with me when we were in the Walt Disney Company together.

Stan Lee’s Superhero Kindergarten is about as strong and perfect a property, as I have seen in almost four decades of children’s television.

In a secret classroom, underneath what appears to be an ordinary school, a very special group of kids have come together with the most unusual superpowers, such that could only have come from the mind of Stan Lee, the creator of Spider-Man, Iron Man, the Incredible Hulk, X-Men, Black Panther, Thor, Guardians of the Galaxy, and The Avengers.

A diverse group of kindergarteners have been given unusual superpowers. Arnold Armstrong (a retired superhero, Captain Courage), was secretly recruited to teach these children how to develop their unusual gifts and use them for the good of mankind (learning lessons along the way in health, exercise, nutrition, anti-bullying, and inclusivity). Of course, as kindergarteners, not everything will go as planned, and often times, hi-jinks and the unforeseen, ensues.

In a wink to his Spider-Man creation, Stan said, “With great power, comes great mess.”  In fact, the great Stan Lee, who audiences worldwide know from his cameos in the Marvel films, will return in animated form with his digitally remastered voice and a cameo in each episode of Superhero Kindergarten.  Whether the school janitor, or the bus driver, or a cafeteria server, the treat of discovering Stan Lee, will be like finding Where’s Waldo in each episode.

We were fortunate to have been approached by Alibaba, the biggest company in China, where both Arnold Schwarzenegger and Stan Lee are celebrities of iconic stature, to be our partner, and with whom we have concluded a deal.  Alibaba will broadcast the series in China on their national children’s platform, and also will be the agent for all consumer products and commerce in China, which we will share with them as partners.

Having said the above, with the launch of our KARTOON CHANNEL! this week, and the extraordinary response we have seen from the series trailer, just completed last week, we have decided to place STAN LEE’S SUPERHERO KINDERGARTEN on not only Amazon Prime, but the full KARTOON CHANNEL! footprint.  It reflects our commitment to providing the very best of top tier children’s entertainment in building KARTOON CHANNEL! It will become the #1 pre-eminent destination for children and will become a ‘tentpole of original content’ for the channel.

Not only is Arnold Schwarzenegger a legendary entertainer and a leading voice in promoting children’s education and fitness, he is a uniquely accomplished investor who brings the perspective of having been Governor of California, the 5th largest economy in the world. I can think of no better or smarter partner to have inside Genius Brands.

Now, relax and enjoy the link below for a "sneak peek" into STAN LEE’S SUPERHERO KINDERGARTEN.

P.S.
Kartoon Channel! has launched today and is up and running! It is available on the AppleTV app, Android App, Amazon Fire, and Roku, among others. Because of today's breaking news regarding Governor Schwarzenegger we will release the schedule tomorrow morning.

Forward Looking Statements:
Certain statements in this press release constitute "forward-looking statements" within the meaning of the federal securities laws. Words such as "may," "might," "will," "should," "believe," "expect," "anticipate," "estimate," "continue," "predict," "forecast," "project," "plan," "intend" or similar expressions, or statements regarding intent, belief, or current expectations, are forward-looking statements. While the Company believes these forward-looking statements are reasonable, undue reliance should not be placed on any such forward-looking statements, which are based on information available to us on the date of this release. These forward looking statements are based upon current estimates and assumptions and are subject to various risks and uncertainties, including without limitation, our ability to generate revenue or achieve profitability; our ability to obtain additional financing on acceptable terms, if at all; our ability to repay our outstanding debt; the potential issuance of a significant number of shares to our convertible note holders which will dilute our equity holders; fluctuations in the results of our operations from period to period; general economic and financial conditions; our ability to anticipate changes in popular culture, media and movies, fashion and technology; competitive pressure from other distributors of content and within the retail market; our reliance on and relationships with third-party production and animation studios; our ability to market and advertise our products; our reliance on third-parties to promote our products; our ability to keep pace with technological advances; our ability to protect our intellectual property and those other risk factors set forth in the “Risk Factors” section of the Company’s most recent Annual Report on Form 10-K and in the Company's subsequent filings with the Securities and Exchange Commission (the "SEC"). Thus, actual results could be materially different. The Company expressly disclaims any obligation to update or alter statements whether as a result of new information, future events or otherwise, except as required by law.

A photo accompanying this announcement is available at https://www.globenewswire.com/NewsRoom/AttachmentNg/ccb16018-e5f3-4846-ad73-c3e51baf12d3 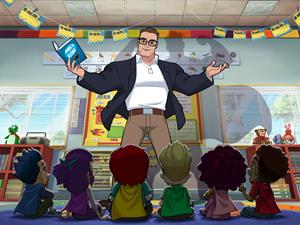