Based on the characters from the bestselling children’s book franchise and popular Netflix Original preschool series, Llama Llama, starring Jennifer Garner, the “Llama Llama” book from Penguin Young Readers and the plush, are available exclusively through the Kohl’s Cares collection for $5.00 each, with 100% of Kohl’s net profit benefiting nonprofit organizations that improve the health and well-being of communities nationwide. The products are available for a limited time, while supplies last.

“We are honored to be a part of this season’s Kohl’s Cares merchandise collection with our evergreen brand, Llama Llama, being featured with new merchandise available at stores around the country,” commented Lloyd Mintz, SVP Global Consumer Products at Genius Brands. “This is a big step in expanding our merchandise program for Llama Llama, as we continue to seek out creative avenues to deliver this classic brand to the legions of fans.”

About Llama Llama
Based on the award-winning and bestselling book series by celebrated author and illustrator Anna Dewdney, Genius Brands’ Netflix Original preschool series is about first childhood experiences and adventures, as well as the special connections between the lead character, Llama, his Mama and his grandparents. Llama Llama tells heart-warming tales of life in a safe, friendly town seen through the eyes of Llama as he interacts with the amazing world around him.  Seasons one and two of the series are available on Netflix with Jennifer Garner in the lead role as Mama Llama.

With over 30 million units in print worldwide, Dewdney’s Llama Llama books from Penguin Young Readers have all been New York Times bestsellers with several titles claiming the #1 spot, and her work has been translated into eight languages. Dewdney’s soothing tales are synonymous with calming early-childhood anxiety and she was praised by the Chicago Tribune as a “geographer extraordinaire of the emotional terrain of preschoolers and their mothers.” Books in her Llama Llama series include Llama Llama Red Pajama, Llama Llama Holiday Drama, Llama Llama Misses Mama, and Llama Llama Time to Share.

A photo accompanying this announcement is available at https://www.globenewswire.com/NewsRoom/AttachmentNg/cb09527f-c4f2-4c7f-8361-f99422b5110f 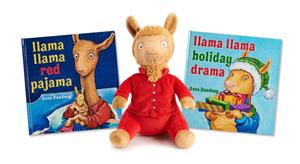