“As we continue to grow our footprint and our viewers, a key to our success is acquiring the very best in high-quality children’s entertainment from top-tier content producers such as The Jim Henson Company. We are excited to welcome The Grinch, Yertle, Horton, and all the characters of Seusville to Kartoon Channel!,” commented Margaret Loesch, Executive Chairman of Kartoon Channel! for Genius Brands.

“Dr. Seuss and The Jim Henson Company are among the most beloved names in children’s entertainment. We are proud of the relationship and expect the series to be a driver of growing viewership for a long time to come,” Said Jon Ollwerther, General Manager of Kartoon Channel! at Genius Brands

“The Jim Henson Company specializes in creating evergreen fantastical worlds that audiences want to visit again and again, and realizing these iconic Dr. Seuss characters as puppets for this award-winning production is no exception. And it’s no wonder that The Wubbulous World of Dr. Seuss continues to be a favorite series, and now families of all ages can enjoy this classic on Kartoon Channel!,” said Anna Moorefield, Vice President, Global Distribution at The Jim Henson Company.

The Wubbulous World of Dr. Seuss features the fun, music and adventures of some of the favorite characters created by celebrated children's author Theodore Geisel (aka Dr. Seuss). These whimsical tales and well-known characters come to life using a mix of masterful puppets built by Jim Henson's Creature Shop and CG animation. Helping children understand valuable lessons about friendship, imagination and much more, The Wubbulous World of Dr. Seuss is fun entertainment for the whole family.

Kartoon Channel! content has been curated through a program code developed in consultation with Stanford University Professor Emeritus Don Roberts, one of the world’s leading researchers of children’s media, to ensure the delivery of positive and purposeful content that provides safe viewing for children. The Kartoon Channel! Content Code, under the leadership of Professor Roberts, ensures among other things, there will be no imitatable violence, no negative stereotypes, no inappropriate language, no degradation of the environment, and no excess commercialization.

To stream Kartoon Channel! and Kartoon Classroom! for free, download our app or visit: www.kartoonchannel.com

About The Jim Henson Company
The Jim Henson Company has remained a leader in family entertainment for over 60 years and is recognized as an innovator in puppetry, animatronics and digital animation. Best known as creators of the world-famous Muppets, Henson has received over 50 Emmy Awards and nine Grammy Awards. Henson’s most recent television credits include Earth to Ned for Disney+ and Fraggle Rock: Rock On! for Apple TV+, and the Emmy-winning Netflix Original series The Dark Crystal: Age of Resistance. Other credits include the Emmy®-nominated productions Dinosaur Train (PBS), Sid the Science Kid (PBS), Splash and Bubbles (PBS), and Julie’s Greenroom (Netflix), as well as Word Party (Netflix), Dot. (Universal Kids /Hulu), and Doozers (Hulu/Universal Kids). Previous productions include Fraggle Rock, The Storyteller, and the sci-fi series Farscape for TV, and the feature films The Star (Sony Pictures Animation), and Alexander and the Terrible, Horrible, No Good, Very Bad Day (Disney), as well as The Dark Crystal, Labyrinth, MirrorMask, and Jim Henson’s Turkey Hollow. The Company is currently in production on Harriet the Spy and a reboot of Fraggle Rock, both for Apple TV+, and Guillermo Del Toro’s Pinocchio for Netflix.

With additional locations in New York and London, The Jim Henson Company is headquartered in Los Angeles on the historic Charlie Chaplin lot, complete with soundstage and post-production facilities. The Company is home to Jim Henson’s Creature Shop™, a pre-eminent character-building and visual effects group with international film, television, theme park and advertising clients, as well as Henson Recording Studios, one of the music industry’s top recording facilities known for its world-class blend of state-of-the-art and vintage equipment.

A photo accompanying this announcement is available at https://www.globenewswire.com/NewsRoom/AttachmentNg/e3e20fc1-ce71-4eb2-a3df-9d08c1aa73c2

The Jim Henson Company's "The Wubbulous World of Dr. Seuss" 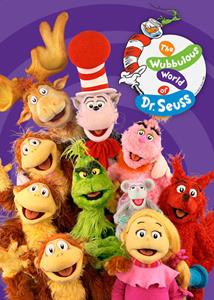 Now available on Genius Brands International's (GNUS) Kartoon Channel!, The Wubbulous World of Dr. Seuss features the fun, music and adventures of some of the favorite characters created by celebrated children's author Theodore Geisel (aka Dr. Seuss). These whimsical tales and well-known characters come to life using a mix of masterful puppets built by Jim Henson's Creature Shop and CG animation. Helping children understand valuable lessons about friendship, imagination and much more, The Wubbulous World of Dr. Seuss is fun entertainment for the whole family.