Stan Lee’s Superhero Kindergarten is one of the last creations from the genius mind of the late Stan Lee, who just like in the Marvel movies, plays a cameo himself in every episode! The series stars the voice of real-life action hero Arnold Schwarzenegger, who is also an Executive Producer on the series.

Schwarzenegger commented: “Stan Lee’s Superhero Kindergarten is near and dear to my heart. What an honor it was to collaborate with Stan on the creation of the series, and I am absolutely thrilled that our new series has resonated so strongly with audiences right out of the gate. Stay tuned for more adventure and comedy as new episodes debut every Friday on Kartoon Channel!”

Chairman & CEO of Genius Brands Andy Heyward stated: “Typically, a new children’s series launch takes time to gain traction among audiences; however, we have been blown away by the extraordinary and immediate viewership and positive feedback with over two million views in just the first weekend! This breaks every record for us on the channel and goes beyond our wildest expectation for the series weekend debut. In the new world of streaming media, it’s hard to compare apples to oranges, but if Superhero Kindergarten were a feature movie, we would be doing cartwheels with this ‘opening weekend ‘box office.’ We know as we roll out new episodes every Friday on Kartoon Channel!, this will only continue to build.   Arnold has been incredible with his passion and dedication to the development and production of the series. Working closely with the iconic comedy director John Landis, Arnold enriched every single line reading. The two of them together were magic in the recording booth, and never settled for anything less than excellence. The show is full of winks at the camera and gems, which adults will devour as much as kids. We know young audiences and their parents will continue to discover this special series in the months and years to come.”

Fun for the whole family, the series opens up the superhero genre for a whole new demographic and draws kids in with action and comedy, while parents can appreciate the quality of content synonymous with Stan Lee. The series includes 26 half-hour long episodes for season one that begins with a two-episode double feature and will be rolled out on a weekly basis thereafter, every Friday.

A photo accompanying this announcement is available at https://www.globenewswire.com/NewsRoom/AttachmentNg/11c2d279-2889-44a6-aa2d-2b1fe88240de 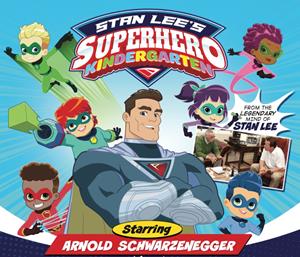