Head of the network, Kartoon Channel! General Manager Jon Ollwerther stated: “Four million+ views of the show in our Premiere Week, blew the hinges off our expectations. Clearly, Stan Lee’s Superhero Kindergarten, starring Arnold is resonating with our audience, and we only expect our viewership to continue to grow as we premiere a new episode today, and each coming Friday. Arnold’s continued promotion across his massive fan base has proven powerful, and his appearance today on The Kelly Clarkson Show, following his appearance Monday night on Jimmy Kimmel Live!, will complement our ongoing marketing strategy which includes influencers, television, digital, and print.”

A new episode of Stan Lee’s Superhero Kindergarten is premiering today and every Friday, available only on Kartoon Channel! The series is available by downloading the free Kartoon Channel! streaming app on Apple and Android devices; on Amazon Prime, on connected TVs and devices by Samsung, LG, Roku, Tubi, Amazon Fire Stick; on YouTube; and more; or by visiting www.kartoonchannel.com.

Fun for the whole family, the series opens up the superhero genre for a whole new demographic and draws kids in with action and comedy, while parents can appreciate the quality of content synonymous with Stan Lee. Season one of the series includes 26 half-hour long episodes that began with a two-episode double feature and will be rolled out on a weekly basis every Friday.

And that’s Kartoon with a “K!” – Arnold Schwarzenegger

A graphic accompanying this announcement is available at https://www.globenewswire.com/NewsRoom/AttachmentNg/334cfc26-0040-4cd1-809e-14e7ad552e29 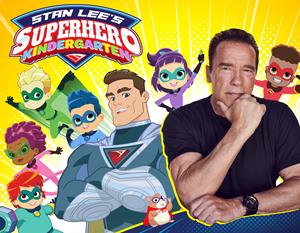 Arnold Schwarzenegger to Appear Today on “The Kelly Clarkson Show”