“I knew the viewership would be great, but even I didn’t think we would be getting this level of views with just 11 episodes streaming so far,” …Arnold Schwarzenegger

Celebrating the latest Stan Lee’s Superhero Kindergarten milestone, Schwarzenegger stated:   “Over 40 million views in just a few short months is an incredible achievement, and I am so honored by this reception. I want to thank the entire team for the fantastic work. I know Stan Lee himself would be so proud.  We have 15 more episodes left in our first season, so this is just the beginning!  Be sure to tune in, only on Kartoon Channel, “That’s Kartoon Channel! with a ‘K!’”

Viewership for Stan Lee’s Superhero Kindergarten since the premiere of the action-adventure comedy series has surpassed expectations with 11 episodes of season one currently available and 15 more episodes set to debut this year. The show is also credited with bringing a greater than 900% increase in unique users to the Kartoon Channel! ecosystem. Furthermore, it is the most watched show on Kartoon Channel! and last week, episodes of Stan Lee’s Superhero Kindergarten represented all ten of the Top Ten Most Watched episodes on the streaming platform.

Margaret Loesch, Executive Chairman of Kartoon Channel!, as well as former President of Marvel Entertainment, and Founding President & CEO of Fox Kids said: “Smart comedy is good business and this is one of the smartest comedies I’ve seen in a very long time.”

Genius Brands will continue rolling out new episodes each week with episode 12 dropping this Friday. The series is available by downloading the free Kartoon Channel! streaming app on Apple and Android devices; on Amazon Prime, on connected TVs and devices by Samsung, LG, Roku, Tubi, Amazon Fire Stick; on YouTube; and more; or by visiting www.kartoonchannel.com.

Fun for the whole family, the series opens up the superhero genre for a whole new demographic and draws kids in with action and comedy, while parents can appreciate the quality of content synonymous with Stan Lee. Season one of the series includes 26 half-hour long episodes that began with a two-episode double feature and [delete]will be rolled CHANGE TO rolls out a new episode on a weekly basis every Friday.

A photo accompanying this announcement is available at https://www.globenewswire.com/NewsRoom/AttachmentNg/a68ea338-e3fa-4244-ad99-9c330810d9bf 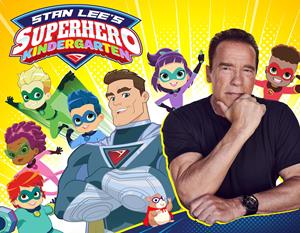 “I knew the viewership would be great, but even I didn’t think we would be getting this level of views with just 11 episodes streaming so far,” …Arnold Schwarzenegger